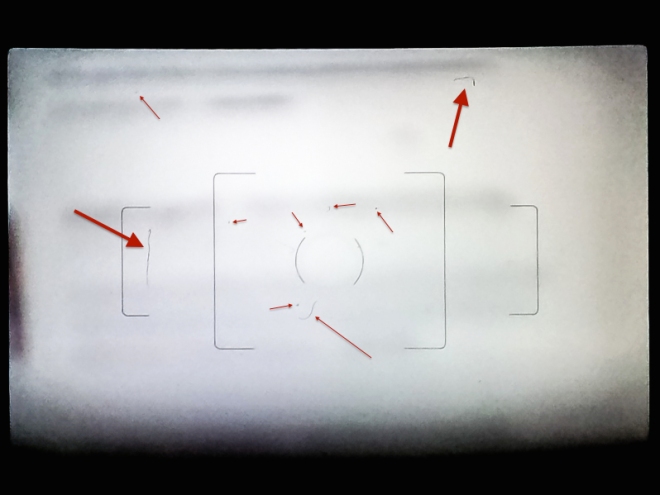 It had been bothering me for quite some time. Every time I raised my camera to my eye it was staring at me – a little black speck in the viewfinder. A couple of days ago, after months of suppressed annoyance, I decided to finally do something about it. Having figured out that I was probably dealing with a piece of dust on the camera’s focusing screen, I picked up a torch and my trusty rocket blower, took the lens off the camera and, pointing the bayonet towards the ground so anything I would dislodge could fall out instead of merely relocating to the sensor or mirror, started to gently blow on the screen. I then put the camera to my eye to check whether it was gone – it was not. So I blew some more, and when that did not help it was time for plan B. I grabbed a lens pen and, using its soft brush, gently brushed over the focusing screen.

How to clean focusing screens, or whether to actually clean them at all, seems to be a particularly contentious matter of debate. Not wanting to totally jump into the fog, I had done a bit of online research on the issue and, having consulted about ten forum threads and four websites, was presented with about thirty-seven different opinions. The views ranged from ‘Never ever touch that thing’ to ‘Just wipe it with a microfibre cloth’. Several posters cautioned against the use of anything but air and warned that focusing screens are extremely delicate little things, prone to scratching even by the slightest touch. But the majority seemed to agree that while sandpaper and pressure washers were certainly out of the question, using a soft brush is a viable and proven way to deal with dust on focusing screens. So when air alone did not work, that was what I did.

Alas, when I finally took the camera to my eye again to check the result, I whimpered. Not only had I not managed to remove the speck, I had actually introduced a dozen new ones, along with what I assumed were three hairs of the brush. I turned the camera around again and vigorously engaged the focusing screen with the rocket blower, managing to remove a couple of the new spots, but not the hairs. Upon close inspection with a torch I finally realised that I was not dealing with brush hairs, but that my treatment had actually left some noticeable scratches in the soft plastic. They are small and hard to spot on the screen, but present quite prominently in the viewfinder – the picture above, taken with my phone’s not-so-great camera, does not quite convey the full extent of the damage. The warners had been right.

Now I am sitting here, with a scratched and dusty focusing screen, ready to tear out my hairs. Every time I point my camera at something, I am presented with a big mess. So what to do? There are two obvious solutions. a) Deal with it, ignore the stuff. In a modern AF capable DSLR the focusing screen has no use other than showing colourful dots for active AF points and usually some brackets that indicate the area covered by said AF points. The actual AF sensor sits far away, below the mirror. The screen is also far away from the sensor, so all there is to the scratches and specks is that they greatly annoy me, but they do not have any bearing whatsoever on image quality or AF functioning. But – did I mention that before? – it annoys the hell out of me, so a) is not an option. b) Change the focusing screen. Most modern DSLRs are designed so users can change the focusing screen on their own. This is because there are different variants out there, such as split screens that some may remember from old analogue SLRs and that make it easier to focus lenses manually. So I could actually order a replacement focusing screen from Ricoh for €39, then put on some latex gloves and in the least dusty room in the house (usually the bathroom right after someone took a shower) carefully take out the damaged screen and put in a new one. I assume I will just have to bite the bullet, fork out the money and go with this option.

So what is the lesson to be learnt here? 1) A little speck of dust on a focusing screen has never ruined a picture. Just ignore it. 2) If ignoring it is not an option, try to get that stuff off with a rocket blower. If that does not work, you can find instructions online how to carefully remove the screen and clean it with warm water and washing-up liquid. There are also cleaning solutions on offer that are similar to wet sensor swaps, whether you are ready to fork out almost €50 for them is up to you. 3) Do not believe anyone who has you believe that you can simply clean a focusing screen with a brush, or cloth, or anything other than what I mentioned above. You cannot. Full stop. End of story.

6 thoughts on “Why to never touch that focusing screen”