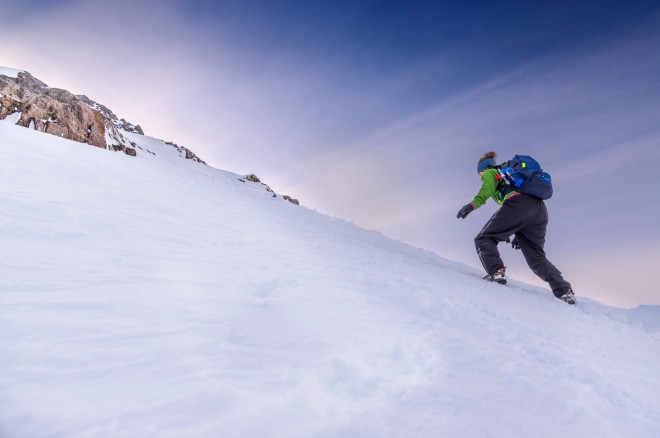 With a ravingly optimistic weather report at hand (has anyone else ever seen the Mountain Weather Information Service assess the chance of cloud free Munros as ‘Almost certain’?!) some friends and I set out to Glen Coe to do some mountaineering last Sunday. Despite already having done so in September, we decided to climb Buachaille Etive Mór again as the deep snow made for a drastically different experience. Due to a considerable avalanche risk we had to plot a route parallel to the main gully, up a steep slope covered in deep snow, and made good use of crampons and ice axes. The sun was out the entire day and for the first time since I came to Scotland almost four years ago I got myself slightly sunburnt, and the hardshell did not come out of the backpack.

The entire day was great fun and I managed to try out some new equipment, including my new carbon fibre tripod and Peak Design Capture Clip, both of which I will be reviewing some time in the future. After a trial of several days I also bought Affinity Photo today, a serious Photoshop competitor launched earlier last year that has received rave reviews and comes in at only €50/£40. The image above is among my first attempts with this software, so I apologise in advance for any clumsy editing mishaps I may have failed to spot.