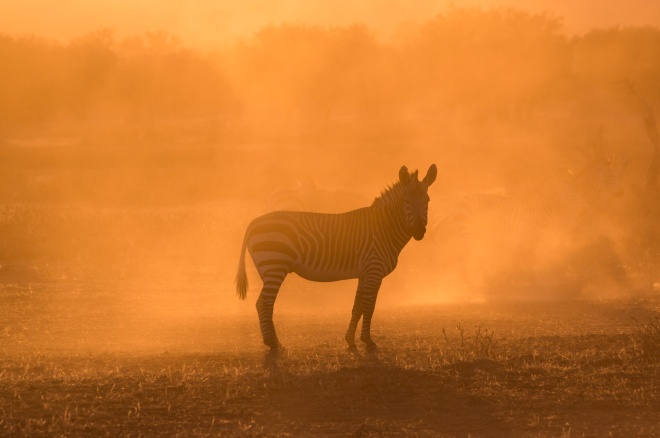 After having explored Etosha for several days, we left and headed south. We first drove to Outjo, a town of 6,000 souls and the southern gateway to the park. We quickly had a look at the modern tourist centre, that turned out to be more of a tourist shop and café, then went to the well-known German bakery. Our travel guide made it out to be somewhat of a big deal, but it pretty much offered about the same variety as your average German village bakery. Which for Namibia is a lot. We bought a couple of pastries from an exceptionally unfriendly shop assistant, then left Outjo and travelled West.

Our destination for the day was Hobatere Lodge. On our itinerary this one was a big, fat question mark. There used to be a very popular, homonymous lodge at the same place for many years, but in early 2011 parts of it were destroyed in a fire and the place subsequently closed. We were informed by our travel agents that a new property was about to reopen at the same place, and consequently booked a night there, more as a quick stop on our way down to Damaraland than actually a main stay. At the time of booking the place had not yet opened, there were no reviews and no pictures whatsoever.

We arrived at the customary gate, opened it, drove through, closed it (same procedure at pretty much every lodge), then continued down a sandy rock-track for about 18 km. While we did never have to switch into 4WD, there were sections were we entertained the thought. It made for a fun drive for us, but I wondered how guests in a non-4WD car would manage to reach the lodge. 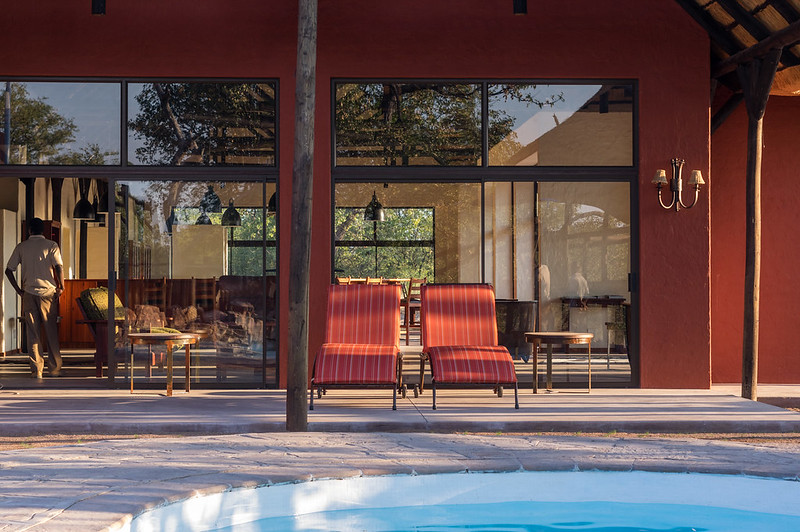 We arrived in the early afternoon, were told to leave our luggage in the car and were given a quick tour around the premises. The young man showing us around oozed pride in the lodge, and he had every reason for it. The lodge is beautiful, the main building a tasteful fusion of traditional Namibian architecture and minimalistic interior design, the view from the porch goes over a plain featuring a waterhole to a mountain range in the far distance. It was apparent that the place opened just recently because there was still a bit of work going on, with a small quarry stone wall being constructed around the entrance area, but overall the lodge made a very neat impression. We were also told that we were the only guests for the day, so we practically had the whole place to ourselves. After we had been helped in taking our luggage to the rooms (very spacious, with a large balcony and a pretty small, but manageable bathroom) we sat down on the porch and enjoyed the view. I had a quick chat with the young bartender, who wanted to know exactly where in German we were from, because his school used to have a German partner school, and soon we were joined by Jaco, the South African manager who told us a bit more about the lodge, the concession and the local flora and fauna. After the old, privately owned lodge had closed it was decided that a new place would be opened under a different model. The new lodge is now owned and operated by the local community based on the principal of collective ownership. Thus the conservancy provides employment for the local youth and generates income for the community. For the first couple of years though a South African company, which also employs Jaco, is contracted with managing the property to get it up and running. 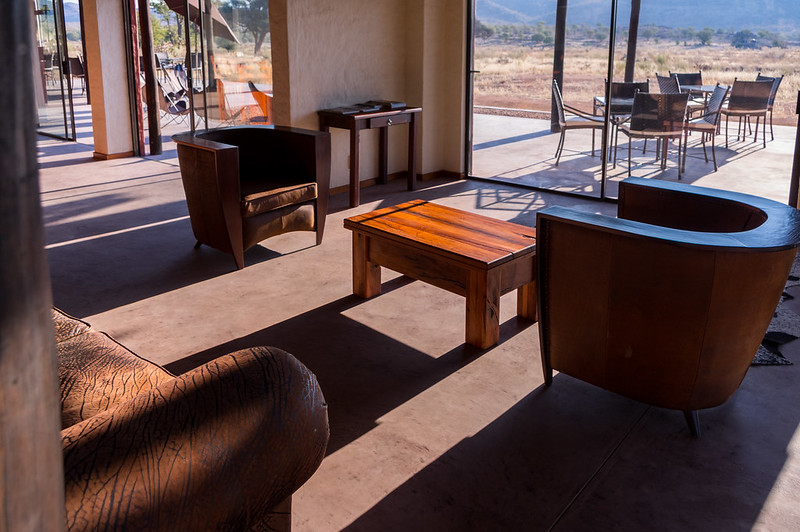 In the afternoon we decided to go on another game drive and have a final attempt at finding leopards. After consulting the head guide the decision was made to go in the early morning hours of the next day. Afterwards we enjoyed a delicious dinner that was certainly worthy of compliments to the kitchen. After we had finished we suddenly heard someone singing in the kitchen, and a couple of seconds later a group of staff members came out in a procession, lined up in front of our table and danced and sang for some time. Initially I felt quite awkward, thinking of it as a stereotypical, clichéd performance that has nothing to do with the contemporary life of those involved, but they all seemed to enjoy it greatly, and Jaco later told us that they had actually come up with the idea themselves. They certainly knew what they were doing, too. Later we were sitting around the fire on the porch, reading, talking and watching the stars. Jaco told us about his experience working with big cats on a farm specialising on rehabilitating wildlife, much to the joy of my brother. When I tried to show my little brother the milky way, Jaco even went inside and switched off all lights on the property for a couple of minutes to make it easier to see. 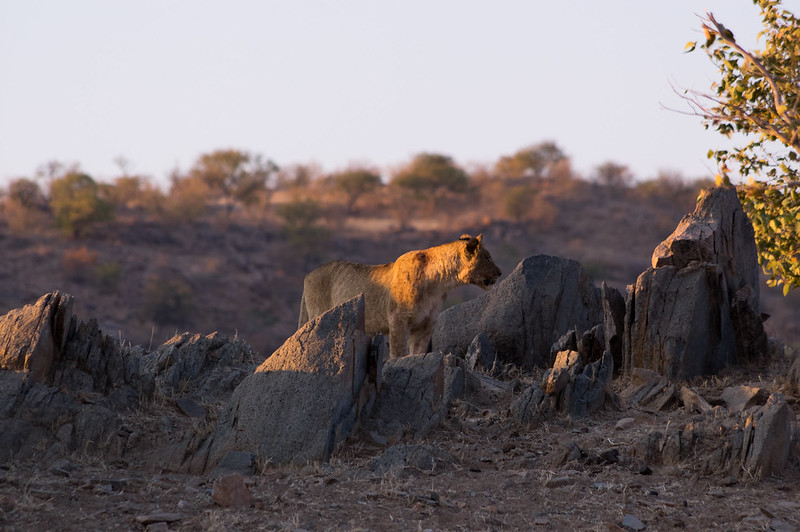 The next morning we got up early for the game drive. One of the great things about Hobatere is that it combines the benefits of a private reserve with those of a national park like Etosha. In contrast to Etosha private reserves can run game drives at any time of the day or night, and there are no restrictions about not leaving your vehicle. However, the game viewing is usually not as good – for reasons of safety and fence maintenance there are usually no elephants present, no lions, no rhinos … Due to its relatively large size and unique location, bordering Etosha, Hobatere does feature pretty much the same wildlife as the national park, with elephants, rhinos and lions roaming freely, at the same time game drives can be scheduled before sunrise and after sunset to coincide with high game activity and the perfect light for photography. The vehicles can also go pretty much anywhere they want to (and feel is responsible to go), they do not have to stick to a road. So we set out in the twilight about half an hour before sunrise with two guides (the head guide, who was new to the property, and another guide to help him navigate). After only ten minutes or so of driving we already ran into our first sighting – a whole pride of lions with a zebra kill close to a rocky outcrop. We immediately stopped and observed them sceptically eyeing us. I tried to take pictures, but it was still way too dark for usable results – at maximum aperture and the slowest possible shutter speed I managed to hold I had to dial in ISO 6400. So we left the spot and explored the plains on the other side of the waterhole. We saw some young oryx majestically galloping through the morning light, and zebras illuminated in a cloud of dust. While the early hour forced me to keep the ISO quite high (around 400 to 800), the light was absolutely beautiful. Not long after we returned to the lions, who had pulled their kill further up the rocks, probably anxious we might try to take it from them. This time the light was better, but the lions had retreated quite a bit which made it more difficult to get shots.

Realising that the safari vehicle we were in was wide open, and any predator could easily just jump up and pull us out, we asked our guide why the lions would not attack us. He explained that the lions did not perceive us as single entities, but as part of that massive, growling thing that is the car. He also added that we should not jump around in the car too much and keep our voices low. Knowing that the only thing keeping that lion from having me for breakfast was the fact that it had not quite figured out yet that I actually was a viable breakfast option was … moderately scary. 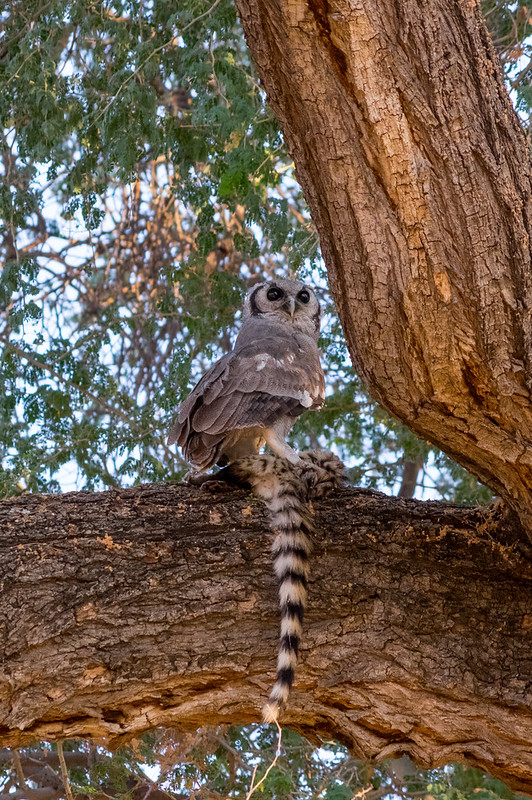 After some time we continued and explored the opposite half of the reserve. In contrast to the plains on the other side of the waterhole, this part featured more trees and rocky terrain. We kept our eyes fixed on the larger trees, until I suddenly spotted a striped tail hanging off a tree branch. Could that be … “Leopard!”, our guide exclaimed. Excited, everyone was staring up the tree, but there was something dodgy about that tail – it seemed way too small. Soon our guide realised his mistake and informed us that what we were dealing with was a very rare sight. We drove a bit further for a better viewing angle, and realised that the tail belonged to a dead genet on which a giant African eagle-owl (by most accounts the third largest owl species in the world) was resting. The owl had killed the genet, then airlifted it all the way up the tree – quite spectacular. I managed to get one good shot, until the owl decided it had had enough of the attention and hauled its prey further up the tree and out of sight.

After we returned from this very successful game drive we had breakfast (the first and only time I had Nutella in Namibia, and the best omelette I’ve ever hard in my life), and after Jaco and I ‘traded’ some of my pictures for a bunch of leopard pictures for my brother, we left for Damaraland. We really regretted having only booked one night. The extremely friendly and attentive people, the unique location, the excellent game viewing, delicious food and responsible business model that benefits both the wildlife and the local community make Hobatere a place that we regretted to leave so soon. I can recommend this lodge to anyone, without any reservations.