After we had escaped the stench of the seals of Cape Cross and returned to out car, we continued southwards towards Swakopmund. Little happened on the drive along the coast, we passed little settlements that our guide book described as weekend getaways for the upper classes of Windhoek, and the wreck of the Zeila, a fishing vessel that got stranded in 2008.

After a couple of rather dull hours we arrived in Swakopmund and checked into the Swakopmund Guesthouse, a modern, well-maintained establishment with very good breakfast and fast internet. We immediately set out to explore the city by foot, wandering through the streets, past German colonial architecture and towards the beach. We checked out the jetty which, in contrast to the rest of the city, was quite busy, had a look at the famous Woermannhaus (closed due to renovations) and quickly realised that this was probably the most boring place we would visit during our travels. Really, there is close to nothing to Swakopmund – a tiny museum, a tiny aquarium, a couple of desert activities, some restaurants, that’s about it. For Namibian circumstances that is probably a lot, but in absolute terms there is not much on offer for the visitor. So we made use of the limited shopping opportunities, had a look at a bookstore and some souvenir shops, thought about buying a large wooden mask for my parents’ living room until we realised that it would not fit our luggage and called it a day. In the evening we dined at 22 Degrees South, an Italian restaurant with surprisingly good food that is located in the local lighthouse.

The next day we rose late, had an ample breakfast, then were picked up from the hotel and driven to the outskirts of the city. Swakopmund, albeit located at the coast, is surrounded by desert on three sides. This opens up possibilities for a number of fun activities, and we chose to have a quad ride through the dunes. On account of never having driven a motorcycle, or even scooter, my brother, mother and I mounted quads with automatic transmissions, while my father picked a much beefier model with manual transmission. Soon we left the the premises, following our guide in a straight line. The ride lasted for about 1.5 hours, with occasional stops to take pictures or deal with someone who got bogged down. Because there was limited space to store personal items, I decided to not bring my camera and entirely concentrated on racing up a dune, then turning around and racing back down. At least to the extent that my quad and the ‘always-keep-in-line’ rule allowed. 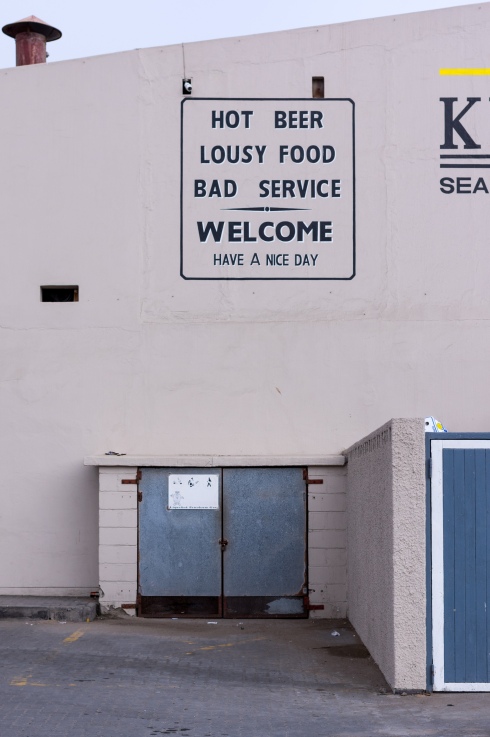 Later that day we got back into the car and explored the city’s surroundings. We drove inland for a bit until we discovered droves of flamingos on shallow lakes between the dunes. I was about to grab my camera and head out for some shots when we spotted another photographer who stealthily tried to stalk up to them. He had not even got any close when the birds spotted him, all rose into the air simultaneously and disappeared. So we continued towards the moon landscape, an area about 30 km inland from the city that, well … looks like the moon. The view was great, but the light horrible, and so I elected to leave the camera in the car. We continued further into the wilderness, at one point leaving the road to follow a dry riverbed through an amazing canyon, but as the sand started to get deeper, we realised we did not have a compressor to de- and inflate our tyres and the sun started to near the horizon, we turned around and returned to the city.

In the evening my father and I went out for dinner in the The Tug. The place is literally just that – a restaurant build around an old, propped up tug boat. Much to our surprise the place was buzzing and we were lucky we had made a booking. The atmosphere and service were great, and the fish was both delicious and made for a welcome change after all the game we had had in the safari lodges.

Overall our stay in Swakopmund was pleasant, but not exactly exciting. If in retrospect I would have had to remove any one stop from our itinerary, this would have been the one. And my photographic yield confirms this. However, our following destination proved to be much, much better, and I am already excited to type it up.