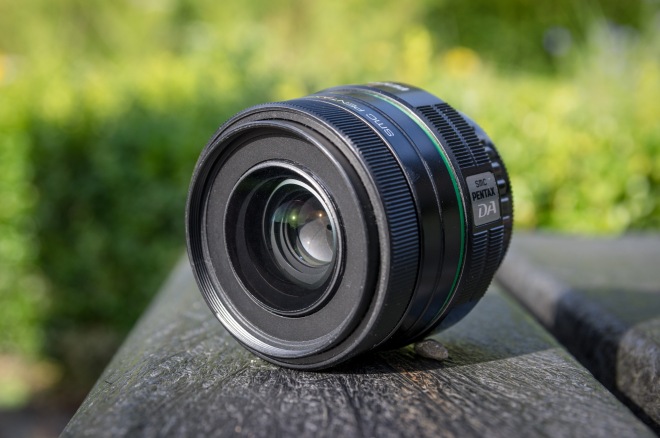 Disclaimer: I do not conduct strict technical or scientific testing and I do not necessarily have experience with similar products to draw a valid comparison. As a result the following review is highly subjective in nature and based purely on my personal experiences with the product. This lens covers the full-frame image circle, but this review is based on use on the APS-C Pentax K3.

The first lens I bought after the kit lens that came with my first DSLR was a good old used nifty-fifty. The Pentax SMC-A 50 f/1.7 (reviewed here) made me see the light – literally. I was amazed by its sharpness compared to the not actually that bad kit, by the shallow depth-of-field it could achieve, the low light capabilities and the beautiful rendering of colours. Two things I didn’t quite like about it: the manual focus made it incredibly hard to nail focus at large apertures in the small(ish) viewfinder of an entry-level APS-C DSLR, and 50 mm was quite a bit too long for my taste. So less than two months later I did the sensible thing and jumped on a modern, AF capable 35 mm lens – the Pentax DA 35 f/2.4. And here are my thoughts on it.

The Pentax DA 35 f/2.4 was introduced in 2010 as an affordable prime lens for the Pentax K-mount. Comparing optical formulas it appears that it is very closely related, if not optically identical, to its venerable FA 35 f/2 full-frame cousin. The DA 35 f/2.4 measures 63 x 45 mm, weighs 124 g, features a 49 mm filter thread and officially costs €199, but can regularly be had for under €130 new, sometimes even lower. In line with that price there is not much in the box, all you get in addition to the lens itself is the front and rear cap, and a bit of paperwork, that’s it. No pouch, no hood. As I use lens hoods on all my lenses I got myself a round metal one like this to screw into the filter thread. It is also a bit disappointing to find that the rear cap included is different from the usual sturdy screw-on design Pentax delivers with most of its lenses. The DA 35 f/2.4 comes with an extremely cheap and flimsy design that only pushes onto the mount rather than screwing onto it. I am not sure why Pentax had to cut corners with a piece of plastic that probably costs only several pence to produce, but they did.

Many users will be happy to hear that while Pentax has designated the DA 35 f/2.4 as a dedicated APS-C lens, it actually does cover the full frame image circle, probably a result of its FA 35 f/2 heritage. Users have mounted it on the Pentax K-1 and reported excellent performance with high border sharpness and little vignetting on full frame.

For a €130 price tag, the build quality is on a reasonable level. The DA 35 f/2.4’s lens mount is made from plastic, and so is the entire exterior. We are not talking about the thin, flimsy kind though, but rather a dense, glossy, high quality material. There is no wobble to be found anywhere, everything is tightly assembled, and while the lens is certainly light, it does not come across as cheap. Yes, a metal lens mount would have been appreciated, but after over two and a half years of use it is still going strong, with only a couple of purely cosmetic scratches. Overall the build quality is fairly decent, and certainly a cut above most entry-level kit lenses, but if you are a professional photographer with a demanding daily routine, I wouldn’t bet on this lens to last for decades. You do get what you pay for, and if we are honest, based on Pentax’ classification system this should be a DA L lens, not a DA.

It is also noteworthy that the DA 35 f/2.4 is not weather sealed – it has survived the odd drizzle so far, but it will not stand up to the same kind of abuse other Pentax lenses can take – and does not feature a distance scale or quick-shift, Pentax’ version of full-time manual override.

On the upside, at 124g the lens is incredibly light, and compact, easily fitting into a pocket. I often take it along on mountain hikes even when I do not plan on using it, simply because it is so small and adds close to no weight.

As with all Pentax lenses released until a couple of years ago, the DA 35 f/2.4 features a screw-drive autofocus driven through a motor in the camera’s body. Like all screw-driven lenses this makes focusing rather audible, if not to say ‘noisy’. The focus ring rotates during AF, so better keep your fingers away. As noted before, there is no full-time manual override, so you will have to switch from autofocus to manual focus on the body before you can manually turn the focus ring. The latter has a throw of about 90° and is relatively smooth for an autofocus lens, making manual focusing a hassle-free affair.

While the AF is noisy, it is certainly very fast. The DA 35 f/2.4 locks focus almost in an instant. The performance in AF.C is less convincing – screw-driven lenses often struggle at following a subject moving on the z-axis (that is towards and away from the viewer), not being able to make adjustments in small enough increments to smoothly maintain the subject in focus. This lens is no exception – I have used it to shoot basketball, and did not get too many shots in focus. A lot of it is probably to be blamed on the Pentax’ camera AF system (LINK), but I have found my Sigma 17-50 f/2.8’s built-in HSM to do marginally better than the DA 35 f/2.4’s screw drive. But then again, a 35 mm prime is hardly the first choice for action photography anyway.

I tested the lens for the accuracy of its focusing and found it to be back focusing enough to require a +8 focus adjustment. Both cameras and lenses are built with a certain tolerance range in mind. If you are lucky the camera and lens tolerance cancel each other out, but it is more likely that you will experience some slight front or back focus. A +8 focus adjustment value is quite marked though, close to the limit of what can be corrected in camera. It was correctable, however, and focuses flawlessly now.

If the build quality is only so-so, and the AF rather outdated, why do Pentax users keep raving about this lens? Maybe because it is an optical marvel, at least at the price point. If found the lens to be sharp wide open right out of the box and this is why after testing the focus I was so surprised to find it at its best with a micro-adjustment of +8. It had already produced sharp images with PDAF before, but afterwards the images were just something else. Below are two completely random sample scenes I shot from a tripod, followed by two crops each at f/2.4 and f/5.6 to show the very high and consistent sharpness throughout. The first scene shows centre, the second one corner sharpness, both were developed from RAW without any adjustments or sharpening except for a slight increase in exposure and WB adjustment where necessary. 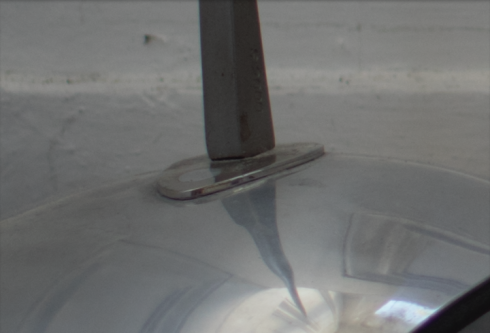 As you can tell, centre sharpness is quite decent at f/2.4 (even though I suspect there is something wrong with this particular image, as normally sharpness looks better at f/2.4!) and outstanding at f/5.6. While this is somewhat to be expected from a prime lens, the magic is in the corners – sharpness is very high right from the maximum aperture, and excellent stopped down to f/5.6. In fact, I would dare to argue that corner sharpness wide open is just as good as the centre sharpness, something rarely seen in any kind of lens.

Chromatic aberrations are close to non-existent – in fact, I had a hard time provoking them, needing some harsh contrast situations. And even when I managed to spot some zoomed in to 100% (as on the sabre blade in the picture above), they were small and inconspicuous, and no problem for Lightroom to take care of. The same goes for flare; no matter at which angle and aperture I shot into the sun, the DA 35 f/2.4 stubbornly refused to flare – a highly impressive performance. The same goes for distortion – I do not shoot brick walls, and have not detected any practical distortion in everyday use.

The lens does vignette wide-open, and while I do not have any tools to measure the exact extent of it I would be surprised if the amount exceeded 1 EV. It is not particularly noticeable and easily corrected in Lightroom.

In terms of build quality and AF, the DA 35 f/2.4 is nothing to rave about, but a solid package, especially at the price point. Optically it impresses with high levels of sharpness and little in the way of distortion, vignetting, flare or chromatic aberrations.

I have praised the lens for its very high resolution and consistent sharpness across the frame wide open, but of course in this case ‘wide open’ is not actually all that wide. Many lenses, especially fast primes, are somewhere between soft and decent wide open and get significantly sharper as they are stopped down. However, many 35 mm primes have maximum apertures in the f/1.4 – f/1.8 range and are thus quite a bit faster than the DA 35 f/2.4. Considering that it seems to have the same optical construction as the FA 35 f/2, and covers the full-frame image circle despite being officially classified as an APS-C lens, it appears that Pentax has artificially limited its maximum aperture to something slower than possible. Under these circumstances it is obviously much easier to get a lens to be sharp wide open, simply by a forced stop-down by design. The same applies to vignetting. This has no bearing on the DA 35 f/2.4’s optical performance, but it does make it somewhat less impressive, especially as many users would have probably appreciated a faster maximum aperture for low light work. The Nikon AF-S DX 35 f/1.8G, for example, costs about €50 more and is a bit larger, but is about a stop faster, an excellent optical performer according to reviews (already sharp in the centre at f/1.8 with the borders reaching high levels by f/2.8), includes silent built-in focusing, a metal bayonet, full-time manual override and a lens hood. If you ask me, Nikonians are getting the better deal here. The slow maximum aperture also limits the DA’s low-light advantage compared to constant f/2.8 zooms – as a consequence it has seen less and less use since I acquired a Sigma 17-50 f/2.8 EX HSM. Yes, the DA 35 is smaller, lighter and technically sharper with less CAs, but unless you pixel-peep the Sigma is more than good enough, and more versatile.

+ quick and accurate AF (when calibrated)

The images shown throughout this review (except for the test scenes and crops) have been freely edited and cropped to my taste, and lens corrections were applied in Lightroom 6. All images were shot with a Pentax Kr or K3.